skip to main | skip to sidebar

Changing the future through time travel

A young boy Adithyaa asked me a question about changing the future through time time travel:

Re: Changing the future through time travel

Posted by Vivake Pathak at 7:58 PM No comments:

God has been discovered and revealed

How much do you know about God? Take the God quiz at http://www.godanddestiny.com/quiz/ and find out.
Posted by Vivake Pathak at 11:10 AM No comments:

If at any time in your life, you are not able to find your path, you can not figure out your destination, and you are unable to see any of your close ones, then do come to me: I will take you to an eye specialist.

--An SMS from a friend
Posted by Vivake Pathak at 11:53 PM No comments:

Rape square: the importance of role play in crime investigation and helping the victim

You must have heard how useful the reconstruction of a crime scene is in solving a criminal case and helping the victim. But people, general public as well as experts in the fields of psychology or criminal investigation, are still uncertain about how far they should go in this reconstruction:

ASI 'raped' rape victim, CID probe on
Fri May 07 2010, 03:39 hrs Rajkot
The CID (crime) has initiated an inquiry against an ASI (Assistant Sub-inspector) with Dhrol police in Jamnagar for allegedly raping a rape victim instead of probing her case.
Sources said the case occurred two years ago, and the CID was to get the DNA test done on the rape victim, her daughter and ASI Magan Kotwal after the victim claimed she had a child from the ASI following the rape. “An inquiry has begun under CID in Gandhinagar after the rape victim submitted an application in this regard,” said a CID official at Rajkot.
Two years ago, the victim, who is from Pav village in Dahod, along with husband and children shifted to Kharva village to work in the fields of one Narsinh Patel. In her application, the victim has accused Patel of raping her. She approached Dhrol police station, where her application was marked to ASI Kotwal, who took her to police quarters at Dhrol and raped her. Following threats from the ASI, the family returned to their native place. The victim made a complaint to the CID later.
18-year-old girl raped [multiple times] in south Delhi
TNN | Apr 11, 2011, 06.00am IST
NEW DELHI: An 18-year-old girl was allegedly raped twice at different parts of the city in South Delhi over the span of 24 hours. The incident was reported late on Friday and four men have been arrested.
According to the complaint filed by the victim, she was first raped by her 42-year-old relative in Vasant Kunj area and then raped again by a stranger. The victim claimed that when she had managed to escape from her relative's clutches, and had hailed a cab in desperation around 11pm, she was again raped by the taxi driver and his two associates.
"She has claimed that she was first raped by her brother's father-in-law — Hanuman Mishra — at his Rangpuri residence. She had gone there to look after Mishra's ailing wife. She somehow managed to escape late at night and hailed a taxi on NH-8, near Radisson Hotel. She claimed that she narrated her tale to the taxi driver, Bijender (22), who promised her a lift," said a senior police officer.
He added: "Instead of helping her, he took advantage of her vulnerable state: he picked up two other men — Vinod (28) and Parveen (27) — on they way and they allegedly raped her in the moving car. After that, the two men got down and Bijender drove her to Dwarka sector 19 to drop her off. It was then that a passerby noticed it and made a PCR call around 4.05am. A PCR van sprung into action and managed to apprehend Bijender on the spot." The other three accused, including Mishra, were also arrested. The girl was taken for medical examination where rape was confirmed, said cops.
Mishra works with a catering company at the Delhi airport, while Vinod is a loader there; Parveen is unemployed. Bijender, Vinod and Parveen are residents of Barona village in Sonepat, said cops. The victim is reportedly a student of class 10 and a resident of Faridabad. Her brother had recently married Mishra's daughter. A case under IPC sections 376 (rape), 376-2 (g) (gang rape), 366 (kidnapping or abducting a woman) and 368 (wrongfully concealing or keeping in confinement a kidnapped or abducted person) has been registered.

Anyway, if you are raped, you should avoid telling about it to a man; otherwise, you are in real danger of going through the horrible experience again, because it seems that many men find a rape-story arousing and a rape victim sort of irresistible. Many women find the narration or idea of rape sexually exciting too, but at least a woman won’t rape you and might even help you, without reconstructing the crime scene literally. This reiterates the importance of the presence of female staff in the departments of criminal investigation and justice.
Posted by Vivake Pathak at 9:01 PM No comments: 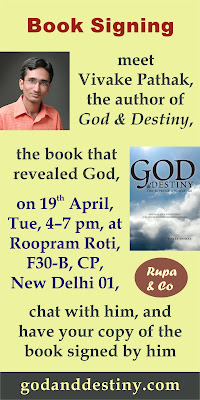 I am doing my fourth and final book signing with the first print of my book God & Destiny on 19th April, 4–7 p.m., at the restaurant Roopram Roti (Dutch Fries & More Pvt. Ltd.), F 30-B Connaught Place, New Delhi. If you would like to meet me, talk to me, get hold of one of the few remaining copies of the first print of my book, have it signed by me in your name, or try out some of the delicious items from the menu of the restaurant, then you are most welcome to the event. The restaurant is just a few steps from Rajiv Chowk metro station. If you are interested in attending the event, please express your intention at its Facebook page:
http://www.facebook.com/pages/Roopram-Roti/127878633914387?ref=ts&sk=wall#!/event.php?eid=152026648193849.
Posted by Vivake Pathak at 11:37 AM No comments:

Vivake Pathak
I am an engineer-turned-writer. My first book, GOD AND DESTINY, has been published by Rupa & Co., one of the best publishing houses in India. It is a 242-page general-nonfiction, philosophic book; more information about it is on its website, http://www.godanddestiny.com. My current areas of research are the nature of soul and foreknowledge (prescience or prediction of future). If you have any knowledge, scientific or based on beliefs, in this reference, then please share it with me. Or if you know someone who has knowledge or experience of the nature of soul or who has the ability of accurate prediction of the future, let me know about them. I highly appreciate your help. I am a philosopher, scientist, researcher, author, and poet. Thinking, researching, and experimenting, I keep on finding new things as I live. My current book, GOD AND DESTINY, and the next one that I have planned are both based on my findings. I have written about one hundred poems, which I would like to publish in my third book. I am in search of laughter, peace, knowledge, excellence, and salvation. I like intelligent conversations that are free from abuses. I love the rain in all its forms and shapes.